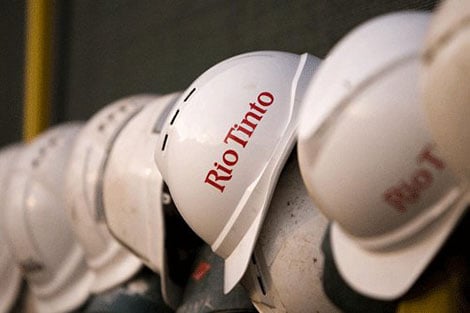 1) South Africa’s Yield Curve Steepest on Record Amid Debt Concerns
South Africa’s budget deficits and growth prospects are getting to bond investors. The yield premium of 2048 cash bonds over 2030 securities has widened to a record, with data on Tuesday showing a surprise third-quarter economic contraction pushing the gap to 105 basis points by 10:46 a.m. in Johannesburg. The spread between the two bonds was as low as 49 basis points at the start of the year.

2) Rio Tinto Shuts South African Mine, Expansion Over Violence
Rio Tinto Group halted mining operations at its Richards Bay Minerals unit in South Africa amid escalating violence in surrounding communities that led to an employee being shot and injured. Smelters at the site in the KwaZulu-Natal province are operating at a reduced level and a $463 million expansion project has been temporarily paused, London-based Rio said Wednesday in a statement.

3) It’s Four Bad GDP Quarters Out of Seven for Ramaphosa
With pledges to boost South African economic growth to as much as 5% by 2023, President Cyril Ramaphosa couldn’t have had a more difficult start to his presidency. The economy has contracted for four of the seven quarters since he took over from Jacob Zuma in early 2018. Only Kgalema Motlanthe, who led the country for eight months after Thabo Mbeki was ousted, had a worse stint, and that was during the global financial crisis.

4) South African Stocks Look for Direction After 3Q GDP Print
South Africa’s benchmark FTSE/JSE Africa All Share index falls for the fifth day, the longest losing streak since May 23, as the combined hit from the disappointing 3Q GDP print and renewed worries over U.S.-China trade talks weigh on stocks. View the JSE All Share Index.

5) Prosus CMD Disappoints Analysts on Thin Discount Reduction Plans
Prosus showed “plenty of passion” at its capital markets day for NAV growth in main classifieds, payments and food-delivery businesses, Jefferies says, though there was no timetable or method for discount reduction. * Jefferies analyst Ken Rumph (hold) writes in note that Prosus aims to generate another $100b of equity value, with $50b of this set to be from the three core business areas.

6) Gold Hits a Wall as Hopes for U.S.-China Trade Deal Resurface
Signs that the U.S. and China are making progress on a trade pact took the wind out of the gold market. Gold was little changed at $1,476.40 an ounce on Tuesday after erasing gains made earlier in the session. The two countries are moving closer to agreeing on the amount of tariffs that would be rolled back in a phase-one trade deal despite tensions over Hong Kong and Xinjiang, people familiar with the talks said. View the Share Prices for Gold.

7) Here’s the Emerging Market Debt Most Exposed to U.S. Yield Shock
Could 2020 finally be the year that the Treasury bears are vindicated? If so, emerging-markets traders may find that Thai, South African and South Korean bonds are the most vulnerable, while those in India and Russia would be the least responsive, a Bloomberg analysis shows.

8) Rand Rebounds From GDP Losses Ahead of PMI
The rand gained, rebounding from its biggest fall in two weeks Tuesday following the release of data showing South Africa’s economy contracted in the third quarter. The currency weakened about 0.6% against the dollar, with concerns about delays in a U.S.-China trade deal also weighing on sentiment. Given the risk-off environment, the rand’s moves this week have been “understated,” according to Rand Merchant Bank.