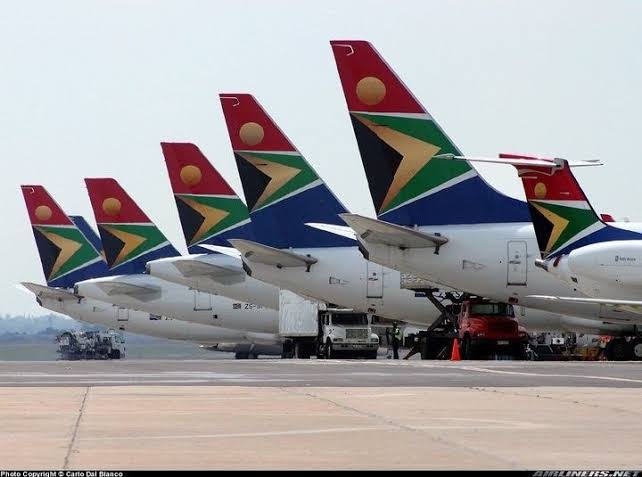 1) South Africa Waives Control of State Airline to Try Save It
South Africa’s government will relinquish control of the loss-making national airline and give it an additional bailout in a bid to stave off liquidation. South African Airways will be placed under voluntary business rescue, a local form of bankruptcy protection in which a court-appointed administrator will take charge and try and turn it around.

2) South African Current-Account Gap Narrows Less Than Projected
South Africa’s current-account deficit narrowed less than forecast in the third quarter as outflows to foreign shareholders increased. The shortfall on the current account, the broadest measure of trade in goods and services, shrank to 3.7% of gross domestic product from a revised 4.1% in the previous period, the Reserve Bank said in a report released Thursday in Pretoria.

3) South African Stocks Look Set for Record Foreign Outflows
The foreign exodus from South African stocks has increased, setting up this year to have the highest outflows since the data was first compiled in 1997. An economy trapped in its longest downward cycle for more than 70 years has weakened consumer spending and drained the appeal of equities for non- residents. View Shares List.

4) South Africa Business Confidence Stays Subdued on Policy Delays
South African business confidence remained close to a three-decade low in November as companies continue to await decisive action by the government to revive the economy. A sentiment index compiled by the South African Chamber of Commerce and Industry rose to 92.7 from 91.7 in the previous month, the business group said in an emailed statement Thursday. Key Insights.

7) Rand’s Volatility Rises Ahead of Trade Data
The rand reversed early losses as investors took heart from signals that the U.S. and China are closer to agreeing the first part of a trade deal. They also weighed news that South Africa’s government will place the national airline under a form of bankruptcy protection to prevent its collapse. Current-account numbers due Thursday are forecast to show that the deficit narrowed to 3% of gross domestic product in the third quarter.

8) Botswana Keeps Key Rate at Record Low for Second Meeting
Botswana’s central bank kept its benchmark interest rate at the lowest level in at least 12 years as it seeks to boost economic growth and with inflation under control. The Monetary Policy Committee held the rate at 4.75%, Governor Moses Pelaelo told reporters Thursday in the capital, Gaborone. The MPC cut the benchmark by a quarter percentage point in August, the first reduction in two years.